The four-day Transylvanian Medieval Castles & Fortified Churches Tour from Bucharest will delight you as you explore Romania’s rich cultural heritage with a friendly local guide.
The Saxon villages appeared in Transylvania around the XIIIth century when the Hungarian kings settled here German colonists. They preserved their cultural identity thanks to the multitude of crafts and traditions, despite the Ottoman Empire’s constant threat. Thus, the Saxons formed a powerful community in Transylvania and protected their land by creating fortifications around their churches. Nowadays, among 150 medieval fortified churches, 7 are part of UNESCO’s world heritage. This tour is the perfect way to discover their story and step back in time for only four days in the mysterious Transylvania.

Day 1 / Bucharest – Sinaia – Bran – Brasov (216 km)
In the morning, we will pick you up from your address in Bucharest at 08:00 am and depart to Sinaia to visit one of the most beautiful castles in Europe – Peles Royal Castle. It used to be the Romanian Royal Family’s summer residence, and it is the most visited museum in Romania.
The second visit will allow you to travel back in time to the Medieval Age. You will see Bran Castle, the most famous castle in Romania, thanks to Dracula’s legendary character.
The day will end in Brasov city. Your guide will take you on a walking tour of the historic district featuring the magnificent Black Church, a Gothic masterpiece, being the most extensive Gothic construction in Eastern Europe.
Overnight in Brasov.

Day 2 / Brasov – Prejmer – Rupea – Viscri – Sighisoara (160 km)
Today you will see part of the Saxons’ heritage in Transylvania.
In the morning, you will leave Brasov and head to Prejmer to visit the fortified church, which was included in the UNESCO World Heritage list due to the excellent preservation.
The day will continue with another medieval monument, this time a citadel, recently renovated, Rupea Citadel, followed by a visit to Viscri fortified church (UNESCO monument).
In the evening you will arrive in Sighisoara.
Overnight in Sighisoara.

Day 3 / Sighisoara – Biertan – Medias – Sibiu (112 km)
This day, we continue our trip on the land of Transylvania.
You will enjoy a walking tour of Sighisoara citadel in the morning and visit the Clock Tower (for an impressive panoramic view).
Sighisoara is the only medieval citadel in Europe that is still inhabited, and a UNESCO monument.
You will leave this beautiful town and stop in the village of Biertan (UNESCO Heritage), where you will see the biggest fortified church in Transylvania and find out the citizens’ unique method to keep their marriages and avoid getting divorced. Prepare for a lovely surprise.
Medias old town will be the second stop, and in the evening you will arrive in Sibiu.
Overnight in Sibiu.

Day 4 / Sibiu – Cozia – Bucharest (275 km)
Sibiu city was a medieval German citadel, with the first documentary attestation in 1191 under the old name Hermannstadt. Being so well preserved, in 2007, Sibiu gained the title of the European Capital of Culture. You will enjoy a walking tour of the old town (the historical center of Sibiu), including the Large Square, the Small Square with the picturesque Liars Bridge, the city’s ancient fortifications, the Council Tower, etc.
Later you will have a traditional lunch and head back to Bucharest.
On your way, you will stop to visit Cozia Monastery, considered one of the most valuable monuments of national medieval art.
In the evening, you will arrive in Bucharest.

Transylvanian Medieval Castles & Fortified Churches Tour - Highlights
~ Private tour for a more personal and intimate experience
~ Funny, Friendly, Experienced Guide: Feel welcome, relaxed, and able to enjoy the tour to its fullest. Ask your burning questions and learn from your knowledgeable guide
~ Visit Peles Castle - one of the most beautiful castles in Europe
~ Visit the famous Bran Castle - known as Dracula Castle - in Transylvania
~ Explore and spend a night in the beautiful city of Brasov in Transylvania
~ Visit Viscri - the little village that made Prince Charles fall in love with Transylvania
~ Explore the medieval city of Sighisoara, UNESCO Heritage and the most well-preserved inhabited citadel in Europe
~ Visit the impressive fortified churches of Prejmer & Biertan
~ Discover Sibiu - considered the most beautiful town in Romania

Know before you book
~ The tour includes accommodation in a 3-star hotel, a good standard within the Romanian hotel rating system. However, if you want, we can upgrade you to a 4-star or 5-star hotel for an additional fee
~ Peles Castle is closed on Mondays and Tuesdays from September to March. For the rest of the year, Peles Castle is closed only on Mondays. On these days, we will visit Cantacuzino Castle in Busteni.
~ Please note that the visits' order during the trip can vary depending on the weather, traffic conditions, and the visiting program switch from summer to winter

Availability:
This tour is available year-round, but not every day (please contact us for a valid date)
To check yourself available dates:
~ please select/ click  'Book this Tour' (right column),
~ select your month/date of travel
(using the arrow below the top navy band)
~ on the bottom of the pop-up calendar
click on Departure Time ‘case’
(it becomes navy when you point the mouse on it - bottom)
Tour price:
~ 629.00 Euros/ person sharing a double room
~ 709.00 Euros/ person in single room
(single room supplement: 80.00 Euros)
Price Includes:
~ Transport by private AC car/minivan
~ Pickup & drop-off at your address
~ English Speaking Tour Guide
~ Accommodation with breakfast included in double room at 3* hotels according to the program
Price Excludes:
~ Lunch & dinner
~ Entrance fees
~ Photo fees at the museums 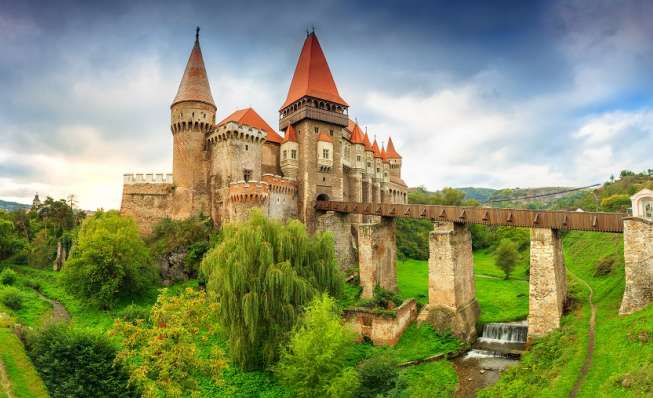 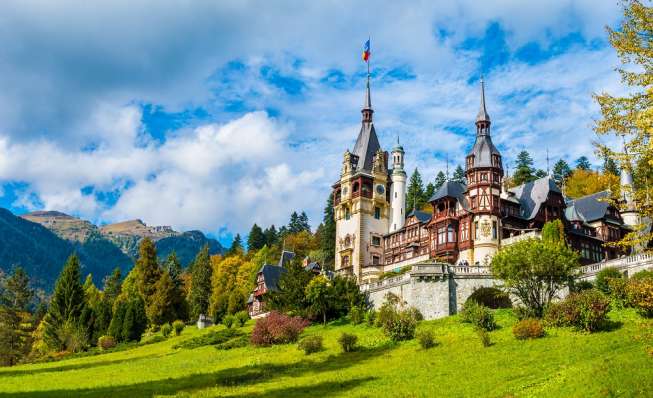 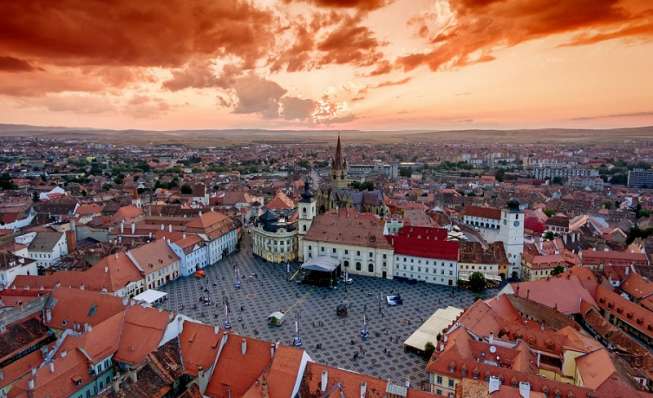 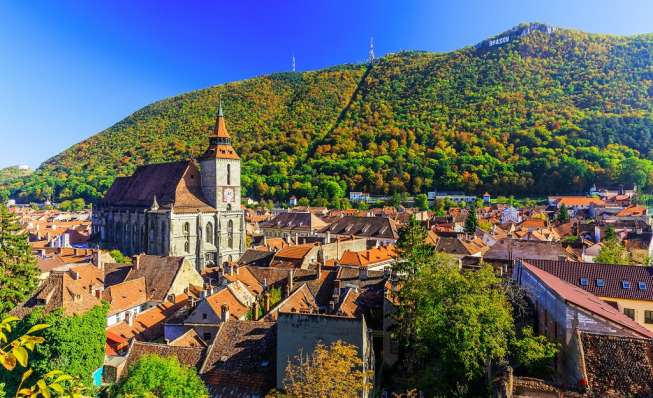 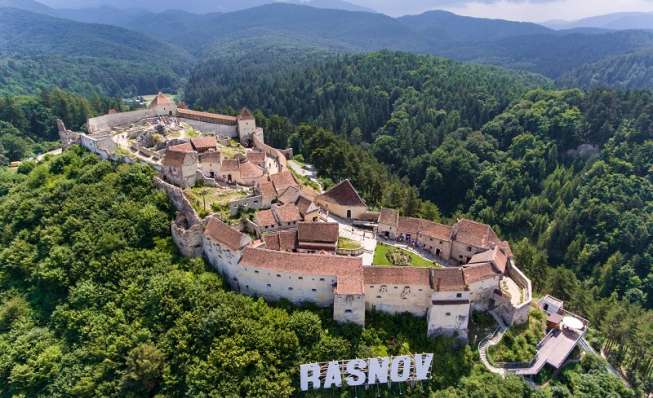 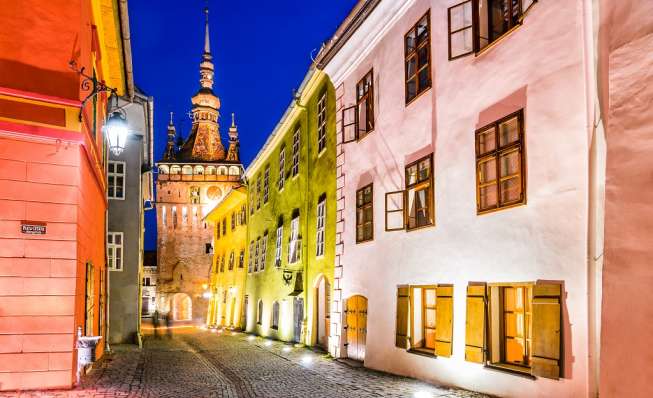 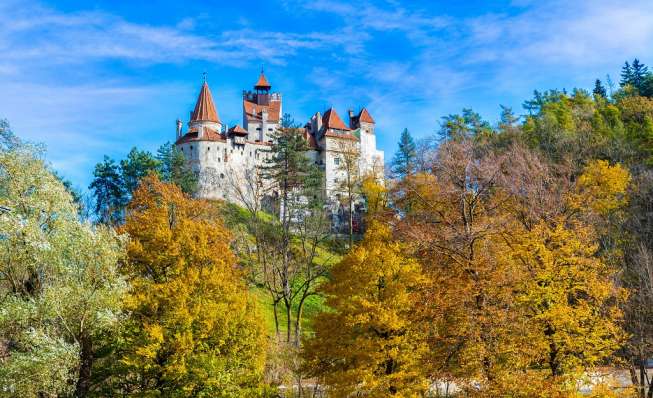 Bran (Dracula) castle
Back to offers