Iasi and the Painted Monasteries in Bucovina,
a four-day trip to eastern Romania

Did you know?
The small village Horodnic de Jos,
an easy 15-minutes drive (12 miles NE) of Monastery Sucevita,
is home to Romania's largest Museum of Vintage Motorcycles.
More than 4/5 of the 106 bikes on display
were made in countries “Beyond the Iron Courtain”, between 1940 and 1980.
Hours: 24 / 7 (guard will open the exhibit hall for you at anytime).
Admission is free.

Note:
Romania’s hotels and B&Bs are licensed - and inspected - by the Ministry of Tourism.
A system of one to five stars is employed to rate hotels, five stars being the highest rating.
The system relies heavily on the diversity of facilities offered, (i.e. room-service or pool).
However, the level of service and attention to detail
may or may not be reflected by the number of stars, assigned to a hotel.
This means not all hotels rated four-star, for example, are comparable at all
and that some three-star hotels may offer a more enjoyable stay than a four-star one.

Inclusions:
~ airport transfers,
~ domestic transportation
(your choice of train, private car, motor-coach or plane),
~ guided tour of the Painted Monasteries,
~ 3-nights accommodations in the hotel of your choice,
(breakfast and all taxes included). 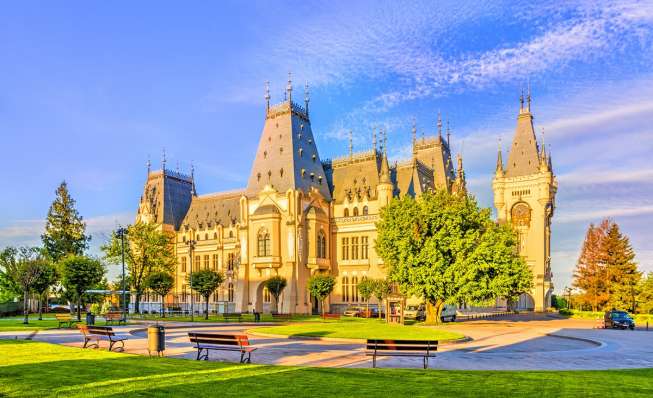